Adidas has long been one of the biggest names in the football industry, with many of their football boots now being synonymous with the beautiful game. From Fitz Walters 1950’s boots to the latest Predator series in the modern era, Adidas have produced some of the best products over the years, with many having been remodelled for today’s fast-paced game. The likes of Franz Beckenbauer, Zinedine Zidane and Lionel Messi have used Adidas boots over the years.
I have put together a list of the best Adidas football boots currently available to purchase, with such products catering for all forms of player, including Sunday league stars and those who harbour hopes of reaching the top. The boots discussed in this article also cater for footballers on different surfaces and various positions on the pitch, with factors such as comfort, ball control and durability having been taken into consideration. 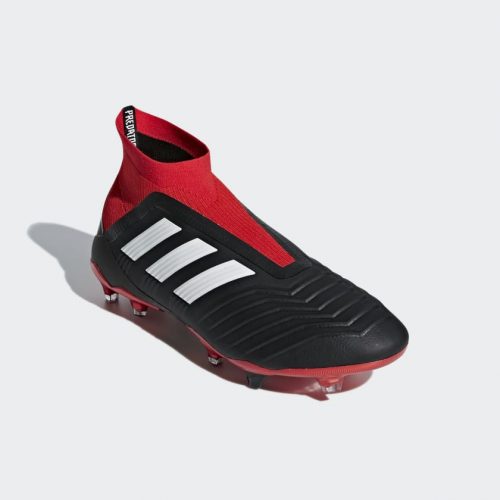 Ever since its introduction to the market back in the 90’s, the Adidas Predator has been a firm favourite for football players of ranging abilities. However, the Predator 18+ is undoubtedly the most tech-savvy boot in the series to date, offering a laceless boot that utilises a prime knit upper in order to lock down the foot at all times.

Elsewhere, I found during testing that the control skin upper also helped to ensure that my touch was as good as it could possibly be on the pitch, whilst the huge striking area makes shooting easier than ever.

The Predator 18+ is available for a range of different surfaces, including firm ground, soft ground and artificial surfaces, however, it is one of the most expensive of Adidas’ boots available today. Having tested this boot, I would recommend purchasing a half-size bigger than your normal size.

Turn your vision into control and prove your dominance with every precise pass, every minute of the game. 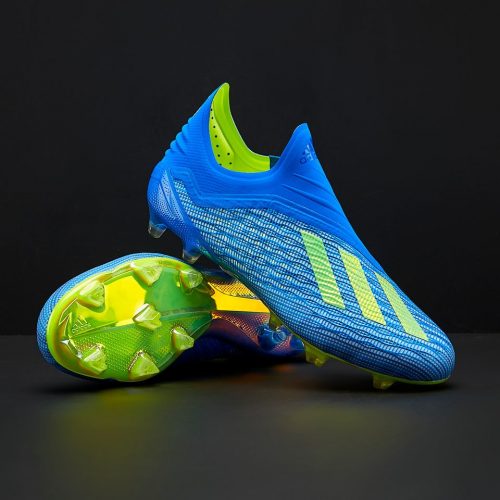 Worn by the likes of Gareth Bale and Mohamed Salah, the Adidas X 18+ is designed for speed, making it particularly suitable for wingers and forwards. A synthetic upper helps to make this the lightest of Adidas’ current football boots, which is also covered in a woven yarn known as skeletaleweave. I found that this made controlling the ball all the more responsive.

The X 18+ is another laceless option from Adidas, however, it is certainly more suited to those with a narrow foot, while a low-cut collar is designed for lockdown when on the field. I believe that the introduction of cushioned zones in the heel only adds to the comfort and stability in this area of the boot.

The firm ground option of the X 18+ boot utilises a unique stud configuration, with arrow-shaped studs in the front and rounded studs in the back. I found during testing that this allows for quick acceleration from a static position.

This is undoubtedly one of the best Adidas football boots, which is also available in a soft-ground version, perfect for those who regularly play on wet or muddy pitches. It is worth noting that the chrome coating found on the sole of the boot will wear away after play.

Sculpted for speed, these firm ground football boots are stripped down to the essentials. 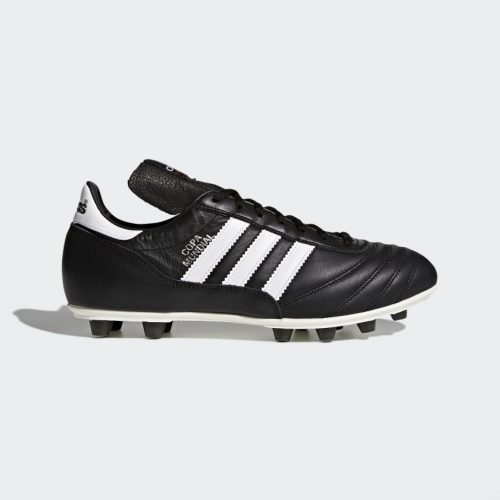 The Adidas Copa Mundial is undoubtedly one of the most easily-recognised boots in history, with many players still favouring this option in the modern era. The simplicity and durability of the boot are among the main selling points, while the kangaroo leather upper helps to ensure comfort at all times.

The Copa Mundial is perfect for both firm ground grass and artificial pitches, while it is also available at an affordable price point. The moulded studs offer grip and traction on such surfaces, while I found that the synthetic lining allows for a quick-drying period after use.

Players who enjoy passing the ball and whose game is perhaps not dominated by speed are likely to love the Copa Mundial, with many having had the same pair for a number of years. In a world of flashy products, the Mundial provides a traditional and old-school option for players, with Adidas having sold over 10 million pairs over the years.

Crafted to deliver a world-class fit and touch, the Copa Mundial continues its domination of pitches across the globe. 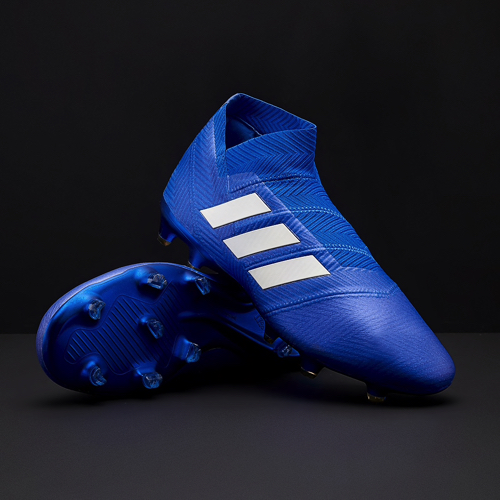 Back to the new breed of boots from Adidas now, with the Nemeziz 18+ having been designed with stability and agility in mind. Perfect for those who like to make sharp turns with the ball at their feet when on the pitch, the Nemeziz 18+ is used by the likes of Lionel Mess and Roberto Firmino.

I found that elastic bandage system on the boot provides support when quickly changing direction, with this feature having been based on sports taping, which many players will be familiar with. Laces are again not required with this boot from Adidas, with my testing finding that they are not missed as a result of the weave material on the forefoot.

Elsewhere, torsion ribs in the construction of the outsole provide additional assistance for players when making quick changes of movement, with this boot certainly offering more than first meets the eye. The Nemeziz 18+ is available in firm ground and soft ground options, along with different sole plates for both indoor and artificial surfaces. This is one of the more expensive boots available from Adidas at present.

It is clear that Adidas are still taking football extremely seriously, with the manufacturing giants having made significant improvements to many of their boots over recent times. As a result, finding the best boot to suit your style of play and demands can be difficult. Here are some of the most important factors to consider before making your final decision.

Position on the Pitch

While previously players would simply select the boot in which they found most comfortable, this is perhaps no longer the case. The position in which you play on the pitch could also have a significant bearing upon your decision, with quicker players potentially looking for a more lightweight boot, while defenders may wish for a more stable and durable option.

Unless you are currently plying your trade in the Premier League, it is unlikely that you are going to receive an endless supply of boots. As a result, it is important to pick a boot that is going to last for a significant period. Therefore, you must take into account the type of pitches that you play on, as well as the beating that your boots may potentially receive from the conditions and opposition players.

With so many football boots on the market, why should you select one of the products discussed from Adidas? Adidas have a long history in the sports industry, with their football boots being known for their good quality and durability. Adidas have ensured that this has remained the case, whilst they have still moved with the times in offering some extremely tech-savvy boots.

Adidas generally cater to players of all type with their models of football boots, meaning that they come in options suitable for a range of surfaces. These include firm ground, soft ground, artificial turf and indoor, with each boot differing in order to match the demands of that particular surface. As a result, it is important to take advantage of this, as this may well provide the difference needed in order to beat your opponent or score the winning goal in an important match.

Rob is the adrenaline junkie of the team. If it's fast moving, high octane and just generally pretty scary, Rob is all over it. His passion lies on the slopes, but has competed in 13 marathons around the world.

Related Articles
We will be happy to hear your thoughts

SportsRambler.com is a participant in the Amazon Services LLC Associates Program, an affiliate advertising program designed to provide a means for sites to earn advertising fees by advertising and linking to amazon.co.uk.